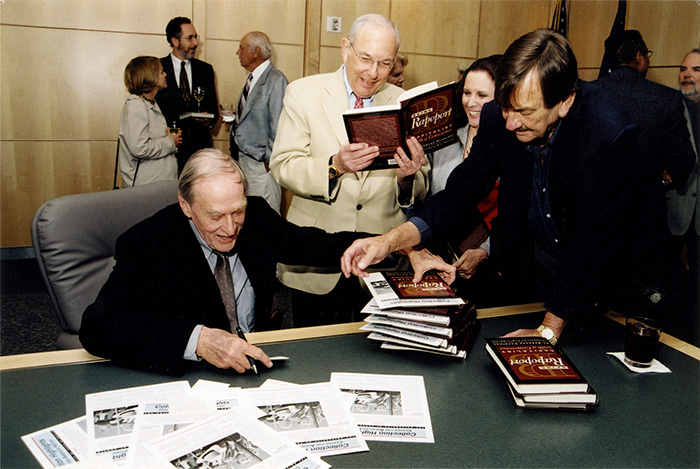 With generous support from the Bernard and Audre Rapoport Foundation and other generous donors, the Dolph Briscoe Center for American History embarked upon a three-year, collaborative project to create a publicly accessible, enhanced digital edition of Bernard Rapoport’s memoir Being Rapoport: Capitalist with a Conscience, as told to Dr. Don Carleton and originally published by the University of Texas Press in the Briscoe Center's Focus on American History Series in 2002.

The enhanced ebook features 1,500 hyperlinks that jump from the text of the online book to corresponding photographs, letters, newspaper clippings, reports, and additional archival documents selected from the Bernard Rapoport Papers, Bernard Rapoport Oral History Collection, and other Briscoe Center collections. These links encourage the online reader to explore Being Rapoport and gain a deeper understanding of Bernard Rapoport's message and philosophy of service.

The Rapoport Legacy Project determined to

Archival collections inventoried for the project

Clarence Ayres was a professor in the UT Department of Economics. Bernard Rapoport studied under Dr. Ayres in the late 1930s, during which time both were members of the Progressive Democrats, and maintained contact with him for a number of years afterward. The collection primarily consists of correspondence regarding economics, teaching, publishing, and events impacting UT.

Attorney Sissy Farenthold was a Texas House Representative and the first serious female nominee for the Democratic vice presidential ticket in the 1972 election. Rapoport was a great supporter of Farenthold during her political campaigns and served as her finance chairman in 1972. The Farenthold Papers document this relationship as well as her tenure as Texas state legislator, participation in the "Dirty Thirty" and reform of political corruption, membership on legislative committees, campaigns for governor against Dolph Briscoe, and nomination to be the Democratic candidate for the U.S. vice presidency, among other topics.

Lawyer and active member of the Democratic Party, Creekmore Fath attended the University of Texas and was a member of the Progressive Democrats, where he befriended Bernard Rapoport. The two maintained a friendship after graduation and Rapoport often contributed to the campaigns on which Fath worked, including those of Sissy Farenthold and Ralph Yarborough. The Fath Papers elucidate Fath's education at the University of Texas; his work in the Roosevelt administration, the Democratic National Committee, and Democrats of Texas; and numerous political campaigns with which he was involved.

Folklorist, entertainer, lecturer, and writer John Henry Faulk was a radio and television broadcaster blacklisted for alleged Communist associations. Faulk sued AWARE, Inc. for libel, and the case was decided in his favor in 1962. Faulk lectured and wrote extensively on civil liberties and his blacklisting experience and was active in civic and political affairs. Rapoport befriended Faulk after his libel suit due to their shared views on labor, civil liberties, Israel, Vietnam, UT, and support of the liberal wing of the Democratic Party. To help Faulk recover from his blacklisting, Rapoport employed him to speak at his company's events and other associations' meetings.

A syndicated liberal columnist known for her biting wit and humor, Molly Ivins was an editor and contributor to the Texas Observer. Bernard Rapoport financially contributed a great amount annually to the Observer, and he developed relationships with many of the staffers and editors, including Ivins.

Maury Maverick Jr. was a San Antonio attorney, columnist, activist, and former Texas legislator. The son of New Deal Congressman and San Antonio mayor, Maury Maverick Sr., Maverick was a three-term member of the Texas House of Representatives and champion of labor and civil rights. Bernard Rapoport and his father supported both Maury Maverick Sr. and Jr. during their political careers, and Bernard eventually befriended Maury Jr. and corresponded with him throughout their lives.

The Pope Papers contain the research materials of journalist John M. Pope for his UT thesis centered on the blacklisting of John Henry Faulk during the Second Red Scare, which is discussed in Being Rapoport.

As the embattled president of UT in the 1940s, Homer Rainey refused to kowtow to the reactionary forces of the Board of Regents and Texas Legislature by standing up for academic freedom and supporting the Economics Department. Rainey's subsequent gubernatorial campaign pitted the liberal and conservative wings of the Democratic Party against one another. Rainey's campaign marked the first time Bernard Rapoport took a visible and influential role in a political campaign. He organized McLennan County, and his efforts resulted in McLennan being the sole county Rainey carried. These events left an indelible mark on Rapoport.

From its first issue in 1954, the Texas Observer newspaper aimed to provide progressive viewpoints and to address topics that readers would not find in mainstream Texas newspapers. Bernard Rapoport began providing financial support to the Texas Observer in 1962 and was consistently a major consumer, contributor, and donor to the Observer. The Bernard and Audre Rapoport Foundation continues this tradition.

A graduate of the University of Texas at Austin, Don H. Yarborough was a Democratic politician, whose ability to articulate liberal values helped bring reform to the Texas Democratic Party. This collection includes motion picture film documenting his 1968 Democratic gubernatorial primary campaign, for which Rapoport served as the finance chairman.

The Yarbrorough Papers document the political career of Senator Ralph W. Yarborough, who became a U.S. Senator and the leader of the liberal wing of the Democratic Party in Texas during the tumultuous 1960s. A strong supporter and close friend of Yarborough, Rapoport helped Ralph win reelection in 1958 and served as his finance chairman in 1964, 1970, and 1972. In the 1980s, Rapoport donated funds to establish a professorship in Yarborough's name at the University of Texas at Austin.

This project was made possible by a lead gift from The Bernard and Audre Rapoport Foundation with support from the following donors:

A project of the Dolph Briscoe Center for American History. With generous support from the Bernard and Audre Rapoport Foundation